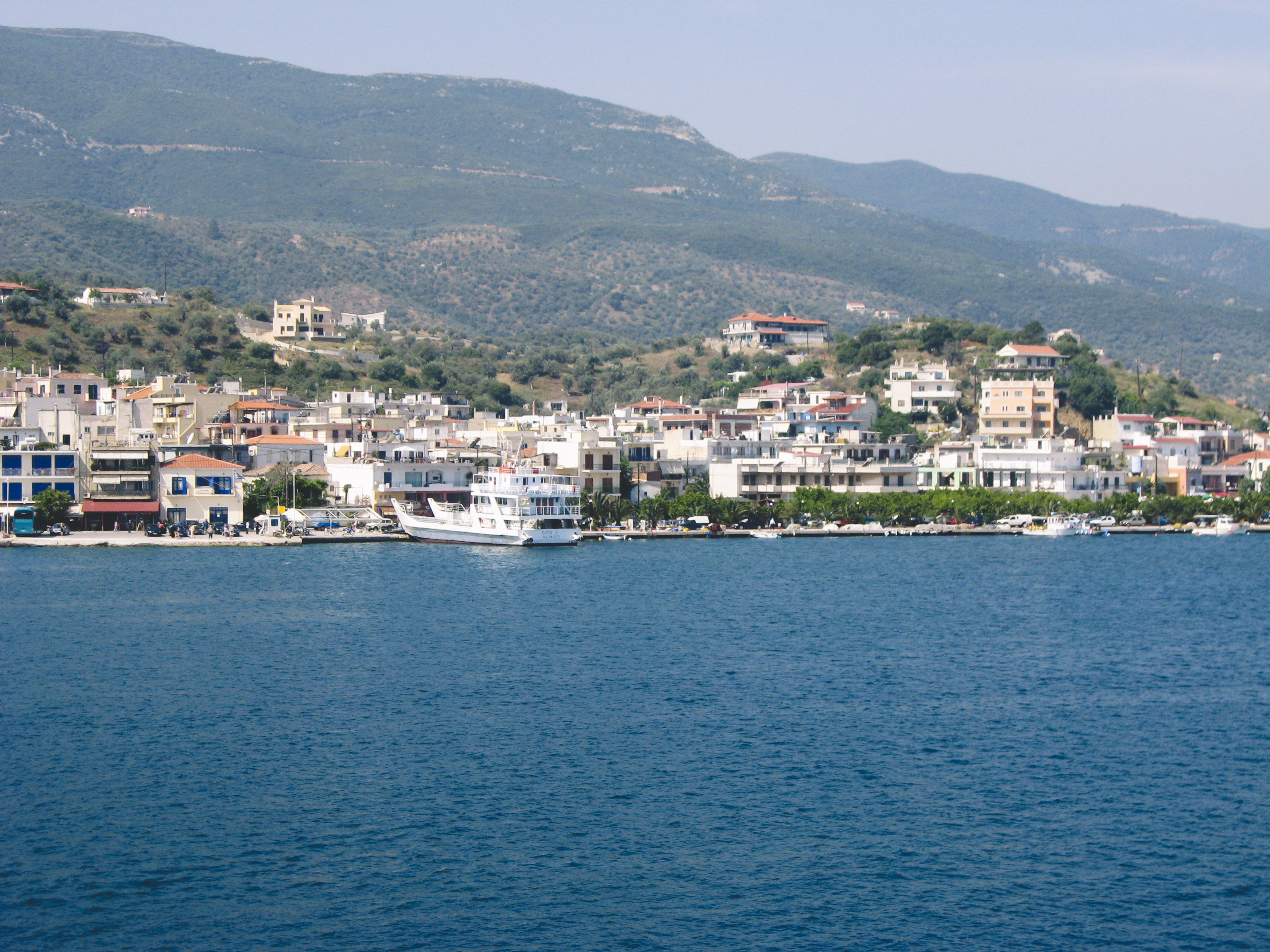 10 Reasons to study abroad in Greece

Around 2500 years ago, Greece was the educational and cultural center of the western world. As an initial testing ground for modern democracy, Greece churned out great thinkers, great warriors and great politicians.

Today the small European country has far retreated from its imperial past. But littered around the fertile grasslands and broken coastlines are constant reminders of an epic past. Greece played a key role in the spawn and spread of western ideas. Whether you’re interested in history, philosophy, mathematics, science or architecture, you’ll find scholarly inspiration amongst Mediterranean bliss.

The semester I spent in Greece was the first time in my life I had ever stepped outside of the US. To this day, I credit my decision to study abroad with facilitating and nurturing my passion for travel and cultural exploration. As anyone who has studied abroad will probably tell you, immersing yourself in a foreign land can have huge impact on your social and intrapersonal development. But in my opinion, a semester or two in Greece can offer an even richer experience than alternative study abroad programs. 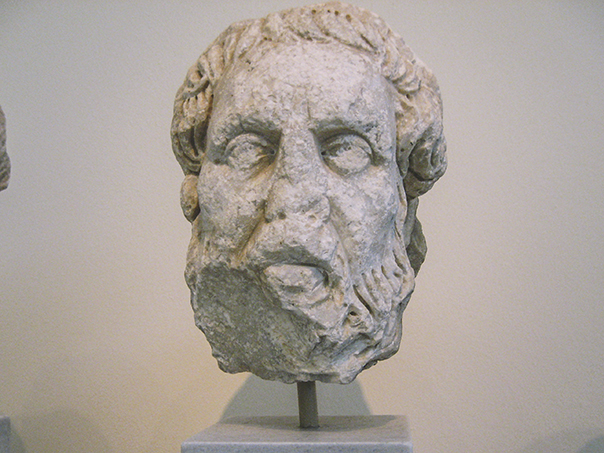 You can think where great thinkers thought

“Know thyself” was the overall theme of my study abroad program. Students were encouraged to explore their own minds, in addition to the country around them. It was only fitting considering the great minds that Greece has spawned. What better place to study philosophy than the homeland of Plato, Aristotle and Socrates. The ideas that formed the foundation and pillars of western society all flowed from ancient Greece. From the mathematical formulas of Pythagoras to the medical ethics of Hippocrates, great ideas seem to flow freely from the Hellenic Republic. 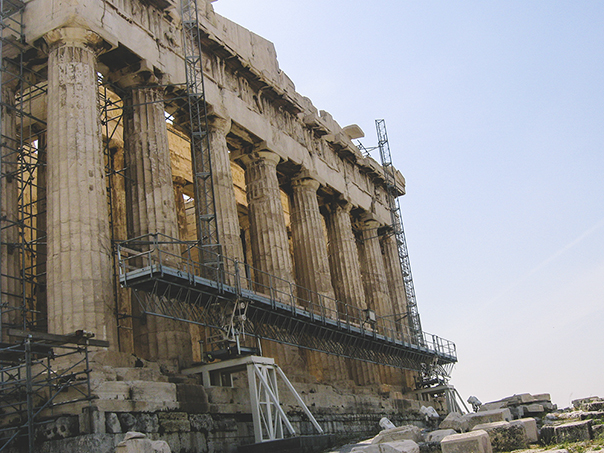 Whether you are studying the humanities or STEM, one can’t help but appreciate Greece’s long and equally rich history. Take ten steps in any direction in the capital city of Athens and you’ll find yourself staring at an artifact of antiquity. The Greeks have watched empires rise and fall – from the first Olympic games in 800 BC, to Leonidas and his 300 Spartans’ last stand at Thermopylae. From Mycenae to Macedonia, from Byzantine to Ottoman rule, the remnants and echoes of a vast and complicated history are scattered across the country. Greece is home to some of earth’s oldest and most famous architectural structures, such as the the Temple of Isthmia in Corinth (690 BC). 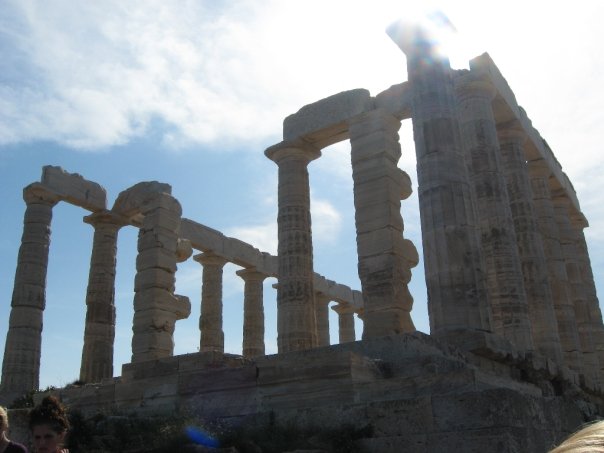 It’s got Mythos (not the beer)

True historical events may not have been as romantic as the events described by Herodotus (the Greek father of modern history). Yet since its origins, Greece has been entwined with the poetic and the mystical. From the gods of Olympus to Homer’s epic tales, students in Greece have the chance to explore the land that inspired some of the most imaginative works of fiction ever written. 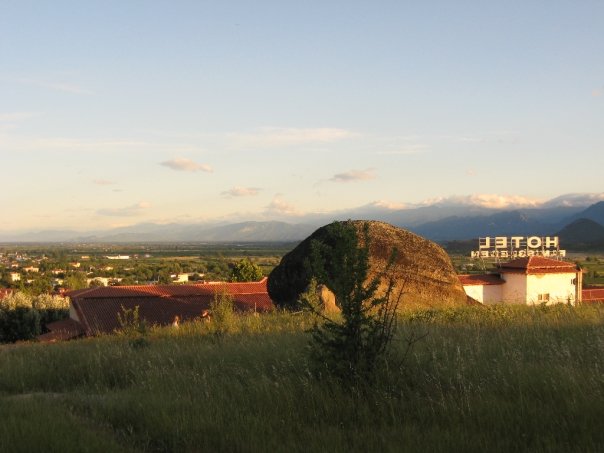 While Greece is famous for philosophy and history, it’s probably equally renowned for its beauty. There are few landscapes more picturesque than the 2,000 islands that rise out of the Aegean and Ionian Seas. But Greece is much more than stone-washed buildings and an endless coastline. The small fertile country is a land of diverse flora and fauna. About two thirds of its territory is covered by rolling green mountains and valleys. In the interior of the country, you’ll find forests, grasslands, rivers, lakes, canyons and caves. The mountains meet the sea on the Adriatic coast. There, you’ll find ink blue water and beaches of both white sand and black volcanic rocks. 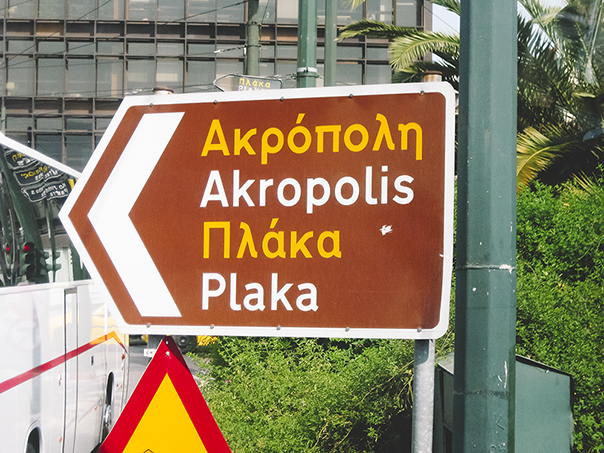 The language is all Greek to me

Studying in Greece gives students the chance to practice and learn one of the oldest and most unique languages in Europe. While modern Greek differs from its ancient predecessor, it is beautiful, complex and and descriptive. It’s difficult to learn, yet you may have a head start if you’re a native English speaker as almost one third of English words are derived from the Greek language. 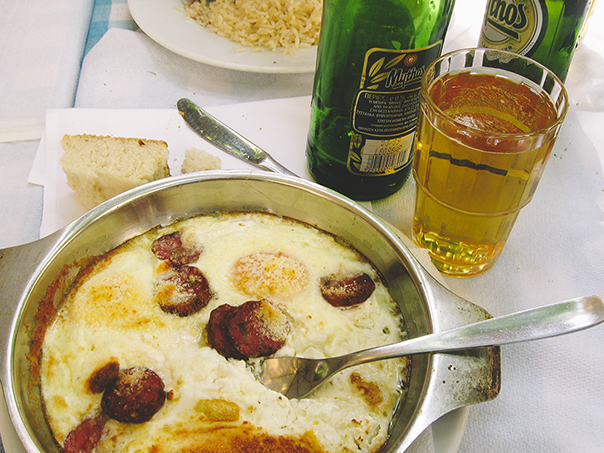 The food is delicious AND healthy

No matter where I travel, I love consuming the local flavors. In some countries, I’ve over-indulged in new cuisines and packed on a few pounds while doing so. In Greece, I stuffed my face with fresh veggies, yogurt, pita bread and the juiciest olives I’ve ever had. It was probably the healthiest month of my life – nutrition wise. That’s not to say there aren’t plenty of ways to spoil a diet in Greece. Moussaka, pastiche, gyros, baklava and the local spirit, Ouzo, are a must when living the Greek life. 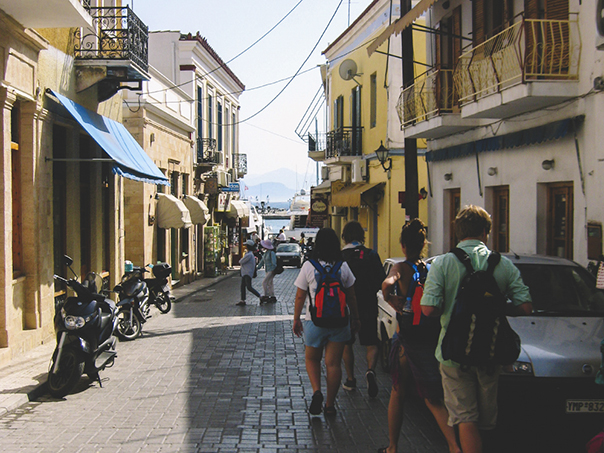 It’s cheaper than most other European alternatives

Greece is one of the cheapest countries in Europe for tourists and students alike. The average student could easily find accommodation and finance a comfortable lifestyle for at least €200 less than you’d spend in other popular European destinations for students such as Italy, France and Germany. According to numbeo.com, an apartment in the city center of Athens costs €285 per month on average, as compared to €980 in Rome. That’s some major savings to put toward travel, food and perhaps a tall glass of Ouzo. 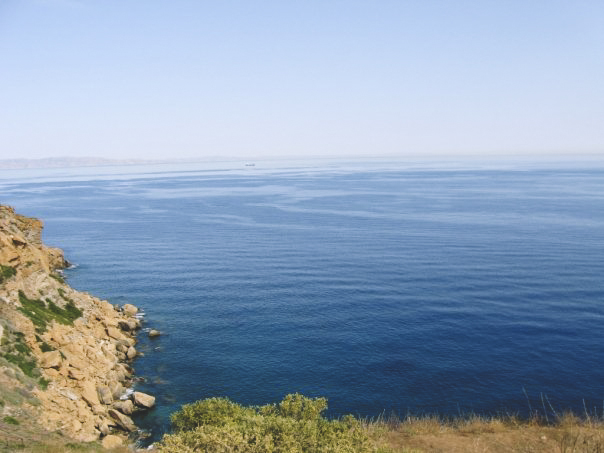 The climate is mellow and mild

Much like California, Greece has a comfortable climate for most of the year. It’s usually warm, it rarely rains, and snow and thunderstorms are few and far between. Of course, during the winter months, nights can be quite chilly and snow is more common in the north of the country. But for most of the year, the weather is mild and inviting. 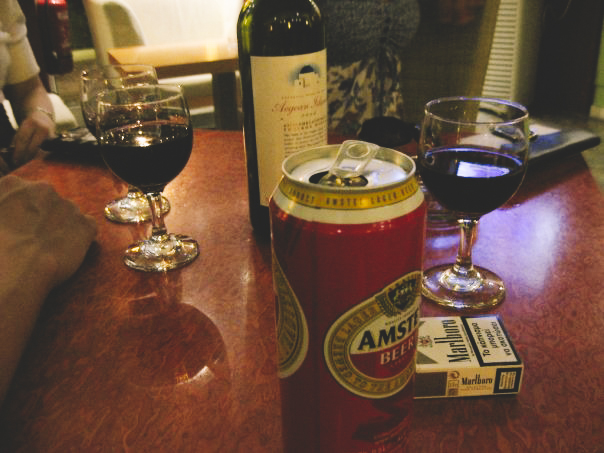 Just like every other country in Europe, Greece has nos shortage of bars and clubs where you’ll be able to flail around to house music and EDM all night. I find it a much more satisfying experience to party like the locals party. If you’re looking for a more traditional flavor of nightlife, head to a local Zorba taverna. Kick back, sip some rosé, and enjoy the sounds of the bouzouki. Who knows, maybe you’ll even join in a dance circle before the night is through. 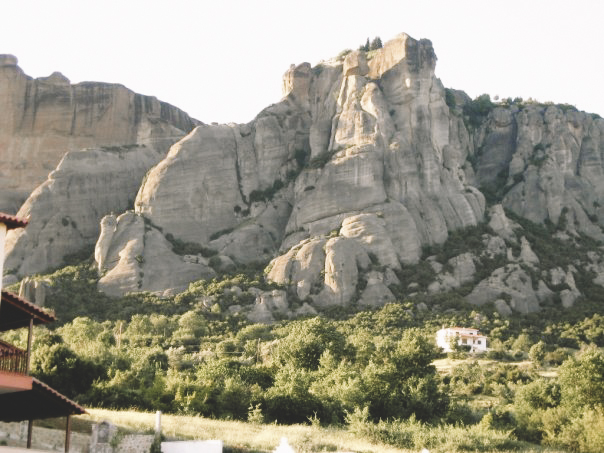 One of the biggest advantages of studying in southeastern Europe is its proximity to so many other amazing places. Students enrolled in European study abroad programs often take cheap, weekend trips to nearby countries  Those studying in Greece will find easy access to three different continents. Instead of visiting European neighbors, you may want to take a quick jaunt to Turkey or Egypt. Of course, I’d encourage anyone to fully explore Greece before traveling to other exotic lands. Afterall, there’s just so much to learn and discover in the small peninsular nation. 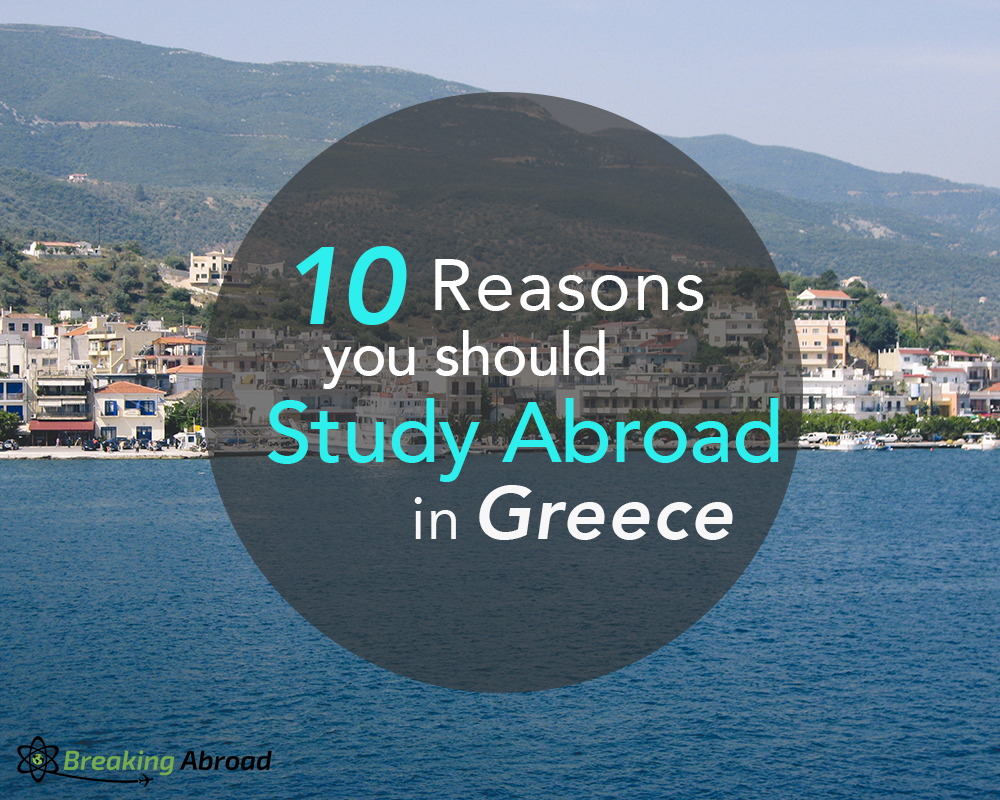 Have you been to Greece? Have you studied abroad? Let me know about your experiences in the comment section below!